The next generation of Messianic leadership is here!

Young men and women are answering the call to Jewish missions. You can help them reach Jewish People for years to come!

I recently received the following note from Dr. Clint Arnold, the Dean of the Talbot School of Theology, sharing this wonderful piece of news:

I am writing to let you know that the New York Board of Regents has renewed our permission to operate the Talbot extension at the Feinberg Center in Brooklyn for another five years (through July 2022). This is great news!

As Dr. Arnold mentions, this year we are celebrating the 10th anniversary of the Charles L. Feinberg Center for Messianic Jewish Studies.

This is our fully accredited Master of Divinity degree sponsored by the Talbot School of Theology in partnership with Chosen People Ministries. The program was created to equip and train both Jews and Gentiles to serve the Jewish people as evangelists, leaders of Messianic congregations, and as future scholars!

We named this life-changing program after Dr. Charles Feinberg, one of the great Messianic Jewish leaders of the 20th century and the first Dean of the Talbot School of Theology. We rejoice in this approval as we receive this as God’s blessing on the program.

Both New York City and La Mirada, California have relatively high costs of living. However, helping students to graduate from the program without debt is one of our goals.

Your donation now will go towards:

You can have a part in training these students through your prayers and generous financial support. Our annual budget to underwrite the program is $150,000. This covers all subsidies which make the students’ out-of-pocket cost affordable enough for them to graduate with a Master of Divinity degree debt-free.

For your gift of $150 or more, I would like to send you our new Israel-focused Chosen People Ministries Messianic Jewish Art Calendar as a thank you gift!

Thanks so much for caring about the Jewish people! 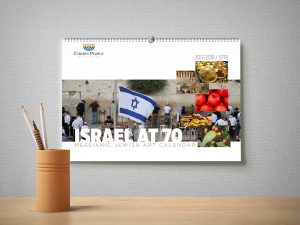 For your gift of $150 or more, I would like to send you our new Israel-focused Chosen People Ministries Messianic Jewish Art Calendar as a thank you gift!

May I share some of my reflections on Dr. Feinberg, who was one of my heroes in the faith? This is one of the reasons I chose to attend Talbot School of Theology in La Mirada, California after graduating from Northeastern Bible College in 1974. There was only one person in the entire world with whom I wanted to study further—and that was Dr. Charles Lee Feinberg.

Dr. Feinberg was something of a legend among the young Jewish believers who came to faith during the turbulent days of the “Jesus Movement” in the late 1960s and early 1970s.
Most of those believers were hippies… and I was one of them!

My parents brought me up in a traditional Jewish home in New York City, and I came to
faith in Jesus when I was 19 years old while traveling around Northern California. It was not only me, but many of my Jewish friends became believers too! Most of us were the only believers in our families, and we thought that we were completely alone. We did not know of any rabbis at the time who were believers in Jesus, and we were hungry for leaders and role models with a more traditional Jewish experience who had come to faith. We were regularly accused of becoming believers in Jesus only because we did not know enough about Judaism, and we needed someone to help us speak to our parents and community leaders!

Dr. Charles Feinberg became the role model and spokesman we were seeking.

Dr. Feinberg was trained as a rabbi and eventually earned a Ph.D. in Archaeology at Johns Hopkins University. He was in one of the first graduating classes of Dallas Theological Seminary, then stayed on to teach Hebrew and English Bible at that institution for a number of years before he moved west for an exciting new role as Dean at the new and growing Biola University (formerly known as the Bible Institute of Los Angeles).

As I mentioned before, the Jewish community at the time constantly questioned the validity of our testimonies. Oftentimes, we were accused of actually rejecting Judaism, and abandoning our people and our Jewish heritage by believing in Jesus. But we knew that we had not rejected Judaism—we had simply accepted Yeshua, the Jewish Messiah.

We discovered that the God of Abraham, Isaac, and Jacob was real and that the Bible was true. This meant that being Jewish was ordained by God, who had created the Jewish people for His own purposes. We were Jews because God made us Jews, and we knew that we needed to better understand our own identity and the Lord’s plan for our people and for us!

Dr. Feinberg loved the Lord and loved his students. I remember going into his office to talk many times during my first couple of years at the seminary. Usually, I had some problem with the way he had graded one of my papers, but most often he was not all that interested in talking about academics. Dr. Feinberg would first ask about my family and about my ministry. Then, like a Jewish grandfather, he would take my hand, hold it warmly, and begin praying for me, for my family, and even for my ability to accept the grade that he would not change!

Dr. Feinberg came to faith through Chosen People Ministries, which was known at the time as the American Board of Missions to the Jews, and he became an instrumental presence in the growth of the Mission. Some of his books, including his superb commentary The Minor Prophets, began as a monthly Bible study in The Chosen People magazine, to which he contributed regularly. He wrote many Gospel tracts, sharing both his testimony and arguments from Scripture for Jesus being the Jewish Messiah.

He wrote these tracts in English, Hebrew, and even in Yiddish. His classic work, Premillennialism or Amillennialism, which was his thesis at Dallas Theological Seminary, is still one of the finest, most coherent, and well-argued polemical works ever written about the future role of Israel in the plan of God.

Dr. Charles L. Feinberg demonstrated in both his life and his ministry that one could be Jewish and believe in Jesus. He loved the Lord, he loved his Jewish people, and he loved our Mission—Chosen People Ministries. And it was in his honor that we dedicated both the seminary training program and the Feinberg Messianic Center in the heart of Orthodox Jewish Brooklyn.

This unique program prepares individuals from every walk of life who sense God’s call to enter into full-time Jewish ministry. The curriculum includes the study of Hebrew, Greek, rabbinic literature and theology, biblical studies, theology, church history, and areas of practical theology.

The Charles L. Feinberg Messianic Jewish Center resides in a 14,000-square-foot facility that includes seminary classrooms, dormitories, a 10,000-volume library, and is home to two Messianic Jewish congregations—one English-speaking and one Russian. Located in Midwood, Brooklyn, the Feinberg Center is a hub for evangelistic outreach and discipleship among the neighborhood’s dense Orthodox and Russian Jewish populace. The Center is also an ideal place for Feinberg students to study, worship, and gain valuable experience reaching Jewish people with the Gospel of Jesus.

Studying Jewish theology was always something I wanted to pursue, but did not think it was possible to do it from a Messianic perspective. My education from the Charles Feinberg Program is preparing me for the ministry I’m called to—in the most hands-on way.
– Jessica, Jamestown, NY

Students are immersed in the Jewish community where they live, as they study and serve in ministry among the Jewish people in New York City. Another student, who graduated from Moody Bible Institute, writes,

My name is Joel, I’m 30 years old and from Long Island, NY. Living and studying at the Feinberg Center has greatly improved my ability to build relationships with Jewish people that eventually leads to a comfortable atmosphere for witnessing to them as a trusted friend. I find that my Jewish neighbors are genuinely interested in what I believe and why, and this opens a big window for Jewish ministry.
– Joel, Long Island, NY

Charlotte, a recent graduate who came to us from Vero Beach, Florida, comments,

The Feinberg program has stretched me in so many ways, strengthening my walk with the Lord and giving me an in-depth training for Jewish ministry. The Jewish people are distinct from every people group in the world and have very specific theological, cultural, and historical objections to Jesus. It is imperative to be able to address these objections, and the Feinberg program does just that. Students learn biblical and modern Hebrew, Rabbinic Literature and Theology, and Jewish History in addition to the standard seminary curriculum. I am currently on an outreach to Israeli backpackers in India and I wouldn’t be here if it weren’t for the Feinberg program’s superb training. I am also blessed to graduate debt-free thanks to the generous subsidies provided by Chosen People Ministries, through supporters like you! I can’t thank you enough! My time here has been a blessing!
– Charlotte, Vero Beach, FL