Eugene is serving as project coordinator and assistant to the Director of the Israeli branch of Chosen People Ministries, Beit Sar Shalom (the House of the Prince of Peace). He resides with his loving wife and ministry partner, Victoria, and their three daughters, Sara, Dana and Naomi, just a 30-minute walk from the top of Mount Zion. Both Eugene and Victoria were born in different parts of the FSU (Eugene in the Ukraine and Victoria in Belarus). Both were raised in atheistic Jewish families. They neither believed in God nor considered Jesus (Yeshua) to be anyone but a Jewish teacher who lived and died long ago nor realized that God had a plan for the both of them. Eugene immigrated to Israel in 1991. On the way to Israel he was given a free Bible. He decided to read the book in order to find out more about the history of the Jewish people but was very careful to avoid reading the New Testament. While in Jerusalem, a spiritual experience led Eugene to read the “Christian” part of the Bible. To his surprise he found this book was not antisemitic, as he had believed, but was written almost entirely by the Jews, for the Jews, and about the Jewish Messiah.

After several years of searching through the Tanach (the Old Testament), trying to live a godly life, and falling short of following the standard he thought every believer in God should live, Eugene asked Yeshua to come into his life and help him to live a life honoring to God. At the same time while visiting her family in Belarus, Victoria also became a follower of Yeshua. Later, she returned to Israel where she and Eugene met at a congregation in Jaffa where Eugene was serving the Lord. After a period of time they were married. After much prayer Eugene and Victoria realized that God had called them to full-time ministry. They came to the US and studied at Moody Bible Institute. Eugene graduated in 2007 and was then accepted to Trinity Evangelical Divinity School where he studied for his MA in Biblical Archaeology. Eugene and Victoria returned to Israel in early 2010. Since then they have served in various ministries involving food distribution, congregational work, ministry among Holocaust survivors, and organizing /leading biblical tours for different churches from all around the world. The Lemperts do not waste any opportunity to share the Gospel with those God sends their way. It is their hope to soon be able to start a new home Bible study which will eventually grow into a new Messianic congregation in Jerusalem.

Invite Eugene to your Church
Contact
Give
Media Kit 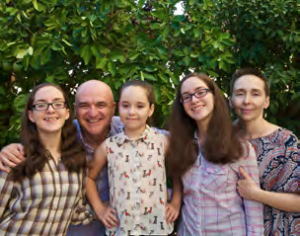