Boris Goldin moved to New York from Russia. He came looking for the “American Dream”-security and success-but his search took a whole different turn when his wife, Shulamit, became a believer in Yeshua (Jesus). Boris resisted her witness and argued vehemently with her. But as he began to read the Bible for himself, Boris sensed the reality of God. After a year and a half of searching, Boris accepted Yeshua as his Savior. He helped begin a few new Russian outreaches in Brooklyn, New York. He knew God’s call to serve in full-time ministry. He left a successful insurance business and is now a missionary with Chosen People Ministries. He also helps lead a Russian-speaking congregation in Southern Florida. Along with being a gifted evangelist and teacher, Boris Goldin is also an effective preacher of God’s Word. His passion is to see Jewish people throughout the world accept Yeshua as their promised Messiah.

Invite Boris to your Church
Contact
Give
Media Kit

“Boris Goldin is a great representative for the Messianic Jewish community and as a believer highly motivated to reach his people with the Good News. He competently connects to church congregations and whets their appetites for more.” 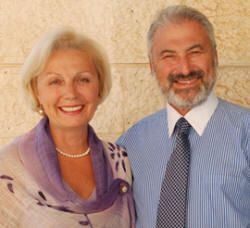