What is the role of the Jewish people today?

Shalom dear friend in the Messiah,

We are at war! Personally, I would rather not acknowledge this, because like you, I much prefer seasons of peace and prosperity. I would rather not focus on passages like Ephesians 6:12, where the Apostle Paul describes our warfare,

We understand that whereas the real war we are fighting is against Satan and his soldiers, these heavenly battles are constantly spilling over to planet earth. The devil is attacking every front, hoping to find us asleep, at ease or deluded into thinking that everything is okay.

We see nuclear sabers rattling in Iran and North Korea that pose a threat to the United States, South Korea, and Israel, of course. Barely a day goes by where we do not hear of an attack either perpetrated by ISIS, Al Qaeda, or another Middle Eastern Islamic terrorist group that is willing to sacrifice their young to destroy the West or countries influenced by the West. There has clearly been an uptick in the persecution of Christians across the globe that breaks our hearts and causes us deep concern for the future of the church.

Global antisemitism is also on the rise, especially in modern Europe. Certainly, we expect that many countries in the Middle East will align against Israel and the Jewish people. Yet, I am also concerned with the rise of antisemitism in North America—especially on campuses around our country.

We might think that our world is in flames and spinning out of control, except that Jesus told us to expect these events in the last days.

For nation will rise up against nation, and kingdom against kingdom; there will be earthquakes in various places; there will also be famines. These things are merely the beginning of birth pangs. (Matthew 24:7-8)

We see so much of this happening today and yet I believe that the vast majority of Christians are not paying attention to what the Bible teaches about the last days. We are sweeping the future under the rug, almost hoping that it will go away. Why? Perhaps because it’s complicated to understand what the Bible says about the future? Or maybe, because the future is filled with uncomfortable events so we simply try and avoid discussing anything but the glorious second coming of our Lord Jesus, which is heartwarming to us.

AN ISLAMIC VIEW OF FUTURE EVENTS

However, I can tell you that millions of Islamic fundamentalists who are terrorizing the West are passionately driven by their vision and beliefs about the future! Many Christians do not understand that radical fundamentalist Muslims, who are seeking to destroy the West and Israel, have a very detailed view of the last days and the role they will play in bringing about the Islamic future.

I am not an expert in Islamic eschatology—the doctrine of last things. Very few followers of Jesus in Europe or North America understand the depth and detail of Islamic eschatology. But I can tell you this, as a Jewish follower of Jesus…I am more driven to serve the Lord and seek the lost because I know the Lord is going to return.

We understand as born-again believers what it means to be driven by our beliefs. Why should it surprise us that radical Muslims are driven by their beliefs about the end times? We should expect it.

I recently finished Joel Rosenberg’s book, entitled Without Warning, which is a nonfiction book. I won’t say much about the book because I don’t want to be a “spoiler,” but I can tell you that it is well-written, scary at times, and a valuable source for understanding the beliefs of Islamic fundamentalists about the last days. Joel does an excellent job of lacing information about Islamic eschatology throughout the book along with a solid witness for the gospel.

I believe that understanding Islamic eschatology is key to comprehending the theological drive that fuels the actions of the jihadists. But, it is even more important for us to understand what the Scripture says about our future!

A CALL TO BETTER UNDERSTAND THE FUTURE ACCORDING TO SCRIPTURE

Perhaps we are guilty of some type of eschatological malaise…even though we have the true source book for understanding the future. Yet, you rarely hear sermons on the future, the last days, or the second coming of Jesus in our churches today. This is a big mistake!

We are at war and unfortunately we do not understand the battle plan because we are not studying what the Scriptures say about the future. This is one of the reasons why many Christians are losing interest in Israel and Jewish evangelism. We are simply not familiar enough with the plan of God that focuses on a future for the Jewish people. Yet Islamic eschatology has a lot to say about Israel, the second coming of Christ, and much more. However, Islamic eschatology teaches that the eventual victor in this spiritual struggle, which plays out on earth, will be the global triumph of Islam.

We need to study the future according to the Bible in earnest!

Jesus mentions this future many times in the Gospels. The following helpful summary reminds us of how often the future kingdom is mentioned by Jesus Himself and in the New Testament.

The Kingdom is mentioned over 60 times in the New Testament alone. All nine New Testament authors mention the Second Coming specifically…most of them numerous times. And Jesus Himself prophesied it several times (as recorded in the four gospels).¹

In an article in Jesus.org, popular American preacher and pastor, Chuck Swindoll, writes,

These facts from biblical prophecy about Christ’s return may surprise you:

Most believers will tell you they do believe in the physical return of the Lord and the establishment of the kingdom, but if you ask anything further you might be told that it is enough to know the future is coming but we should not debate the specifics.

It seems that any discussion about the literal second coming of Jesus that goes beyond acknowledging the event is skeptically viewed as some type of obsession on unknowable future events. We are accused of promoting sensationalism! Terms like the Great Tribulation, the Rapture, the Antichrist, etc., are viewed as archaic and irrelevant to ministry in the 21st century.

Yet, Jesus teaches His disciples that the “end of the age” is as certain as His death and resurrection. Should we concern ourselves with the details? Of course! As His disciples, we should not trivialize truth that mattered so profoundly to our Savior.

The radical Islamic fundamentalists are sacrificing their lives for their own version of the end of the age!

What about us? Does the future God has promised move us to greater dedication to the Lord and to the Great Commission?

JEWISH EVANGELISM, THE GREAT COMMISSION, AND THE FUTURE

If we ignore the future Jesus envisions for Israel and the nations, we risk short-circuiting our understanding of the future God has promised his people. This includes a more literal establishment of the Davidic Kingdom (promised in 2 Samuel 7:14ff and 1 Chronicles 17:10-15, Psalm 89, etc.) and even further developed in the writings of the prophets (Isaiah 42, 44, 49, 60-65, Jeremiah 31-35, Ezekiel 36-39, etc.). If we minimize the teaching of the Old Testament by spiritualizing the coming kingdom or de-literalizing the Abrahamic and Davidic promises of God to Israel, then the consummation of the ages will be unclear and less relevant.

This pegs the salvation of Israel as one of the great events of the last days. No wonder the devil hates us and despises our ministry! This accounts for so much of the antisemitism growing in our world today. To counter this evil is to know what God has planned and to act in accordance with the future He has designed. This means that we should pray for Israel and the Jewish people and then act…by bringing the gospel to the Jewish people.

A CONFERENCE ON ISRAEL, THE FUTURE, AND THE GREAT COMMISSION

I hope you will want to learn more about the future God has prepared for us by studying the Scriptures. To help in this, we have scheduled a major conference to be held at both Dallas Theological Seminary and Southwestern Baptist Theological Seminary (Fort Worth), beginning Friday afternoon and concluding on Saturday night—October 13-14, 2017. The Friday afternoon event features Dr. Darrell Bock, Dr. Mark Yarbrough, and Joel Rosenberg and will be held on the Dallas Theological Seminary campus. That evening, a concert will be held at Fellowship Bible Church in Dallas featuring Todd Agnew and an amazing Messianic group from Israel, Miqedem, as well as Joel Rosenberg preaching. On Saturday, we have a full day of lectures planned at Southwestern Baptist Theological Seminary, which will include Joel Rosenberg, Dr. Craig Blaising, missionary leaders from Israel, and myself. That evening, we will sponsor a Pray for the Peace of Jerusalem event on the Southwestern campus featuring Joel Rosenberg and Messianic musician Marty Goetz. You can register today by going online and clicking on www.thegospelandthemiddleeast.com

YOUR SUPPORT FOR JEWISH EVANGELISM

Thank you for reading this important letter and for your faithful support and prayers. Right now we have short-term mission teams in Brooklyn, Jerusalem, and Tel Aviv, and in a number of other major Jewish population centers preaching the gospel in preparation for the second coming of Jesus. Your generous support is deeply appreciated, as we cannot continue in this great prophetic work without your sacrificial giving. As you can tell, I am not asking for any specific project—but simply asking for you to give generously to the work of preparing the way for the second coming of Jesus by proclaiming the gospel among Jewish people.

Thank you so much for your gifts. As a thank you, for your generous donation of $250 or more, we would like to send you a copy of Joel Rosenberg’s latest book, Without Warning. I know you will enjoy it as much as I did.

Blessings in our soon-coming Messiah!

Give today and receive a copy of Joel Rosenberg’s latest book,
Without Warning 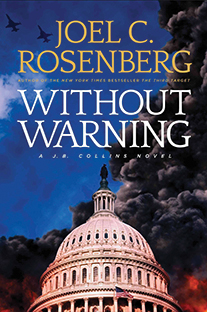 P.S. For your gift of $250 or more we would like to send you a copy of Joel Rosenberg’s latest book, Without Warning. A valuable source for understanding the beliefs of Islamic fundamentalists about the last days.