Why to the Jew First?

Shalom and an early Happy Thanksgiving to you! I pray you will have a great time of rejoicing with your family and friends as you reflect on all the great things God has done.

I am sure you would agree that salvation is our greatest joy. Sometimes I ask myself, “Where would I be today without Jesus?” All I can say is that as a 19-year-old Jewish young man, I was headed for an early grave and an eternity without the Lord. But, thankfully, God gave His Son as a perfect sacrifice for our sin. Now my life and yours are filled with goodness, love, peace, and more joy than we could ever deserve.

Jesus is everything to me and that is why I am so thankful during this season of the year.

This is also why I am so burdened for my own people—the Jewish people! I have given my life to the salvation of Israel, and I thank God that I have the privilege of serving with a 123-year-old ministry dedicated to reaching the Jewish people with the Gospel.

I am also so thankful for you—I deeply appreciate your reading our publications, your prayers for us, and your generous financial support, which enables our work among the Jewish people.

To sum it up, this Thanksgiving season, our entire staff around the globe is thankful for the Lord and thankful for you!

I am often asked why we believe Jewish evangelism is so important. I love to respond to this excellent question…especially during the Thanksgiving season!

Our motivation for Jewish evangelism begins with thanksgiving to God, who chose the Jewish people.

As Jesus, Himself said, “You worship what you do not know; we worship what we know, for salvation is from the Jews” (John 4:22).

Without the Jewish people, we would not have the Bible or the Messiah Himself! This is quite fundamental, but there are many clear passages in Scripture that support the case for the importance of Jewish evangelism.

Paul, who was also a Jewish believer in Jesus, writes, “For I am not ashamed of the gospel, for it is the power of God for salvation to everyone who believes, to the Jew first and also to the Greek” (Romans 1:16).

Although Paul was considered the apostle to the Gentiles, he still carried a great burden for his own people—and he practiced what he wrote. In fact, wherever Paul traveled during his ministry among the Gentiles, he first preached the Gospel to the Jewish people who lived in that area (Acts 13:13–52; 14:1–5; 18:7–11; 19:8–10).

We should ask ourselves why the Apostle Paul made Jewish evangelism such a priority in his own life. The Apostle Paul’s argument may be summarized as follows: “If Jewish people are successfully evangelized, then Jesus the Messiah will return.” There was a sense of end-times urgency in his preaching which is why Paul encouraged the Roman believers, and us, to prioritize the evangelization of the Jewish people.

Has God Cast Off His People?

Matthew 23 is a pivotal passage in understanding the logic of the argument:

Jerusalem, Jerusalem, who kills the prophets and stones those who are sent to her! How often I wanted to gather your children together, the way a hen gathers her chicks under her wings, and you were unwilling. Behold, your house is being left to you desolate! For I say to you, from now on you will not see Me until you say, “Blessed is He who comes in the name of the Lord!” (Matthew 23:37-39)

Throughout His earthly ministry, Jesus took every opportunity to turn the hearts of His Jewish people to Himself, but His efforts were thwarted by the Jewish leaders who rejected His person and message. Finally, the Savior was heartbroken by experiencing the rejection of His own people (Isaiah 53:3, John 1:11). Matthew 23 should be viewed as a lament, reflecting the love of the Messiah for His people. He portrays Himself as a hen wanting to gather her chicks under her wings, which is a very moving image of the Savior’s love for His chosen people.

Yet, He was unwilling to reject the Jewish people because they rejected Him. On the contrary, He added a promise: The Jewish people will not see Jesus again until they believe He is the promised Messiah and cry out, “Blessed is He who comes in the name of the Lord” (Psalm 118:26).

Some suggest that this declaration is reminiscent of the statement made by rabbis at weddings when the groom approaches his wedding canopy to receive his bride. Therefore, by saying, “Baruch haba bashem Adonai,” Israel, the bride, is portrayed as recognizing Jesus as her true bridegroom, linking the repentance of the Jewish people with the second coming of Jesus.

Another Old Testament passage which teaches this idea is Zechariah 12:10. In this passage, we learn that one day the Jewish people will look to the One who was pierced and then mourn for Him like one mourns for an only son.

Another important passage is found in Romans 11, where the Apostle Paul argues that God has not cast off His people, Israel, despite their national rejection of Jesus as their Messiah. Paul argues that God is not finished with Israel because one day “all Israel will be saved” (Romans 11:25–27).

He writes in Romans 11:15, “For if their being cast away is the reconciling of the world, what will their acceptance be but life from the dead?” The Lord will not reject His people because He is always faithful to His promises (Romans 11:29). In fact, the very existence of the Jewish people today is a powerful argument for the truth of the Bible and evidence for the existence and power of the God of Abraham, Isaac, and Jacob.

The great day of salvation for the Jewish people will bring about the return of the Lord and God’s blessing upon the world because, in that day, Jesus will sit on the promised throne of David, as predicted in Isaiah 9:6-7 and 11:9-10.

The Bible teaches that the Jewish people will turn to Jesus in the last days and only then will the Lord return. This is why reaching Jewish people with the Gospel must become a priority for all Christians. The salvation of the future remnant of Israel, as described by Paul, is one of the final events preceding Jesus’ second coming and the culmination of the Abrahamic blessings which were promised to the world in Genesis 12:1-3.

There is a remnant of Messianic Jews in the world today, and I am so glad to be included among them;  however, a great movement of Jewish people who will believe in Jesus is coming, and this is the hope that really motivates us!

What Is Our Role Today?

The Apostle Paul reminds us that we are God’s instruments in preparing the hearts of those who will come to faith today and even instruments to those who will be a part of the future remnant. He writes, “I say then, they did not stumble so as to fall, did they? May it never be! But by their transgression salvation has come to the Gentiles, to make them jealous” (Romans 11:11).

The salvation of the Jewish people will come about because of the power of God, but He wants to use us—especially non-Jews—to share the Good News with the Jewish people. Through your prayers, giving, and witnessing to your Jewish friends and family, the plan of God will go forth in power!

I pray the Lord will burden all of us to reach Jewish people for Jesus. Remember, it all begins with our thankfulness to God for all He has done through the Jewish people and through the greatest Jew who ever walked the earth—Jesus the Messiah!

Our best estimate is that fewer than one percent of the worldwide Jewish community believe that Jesus is the Messiah. This gives us plenty of opportunities to preach the Gospel to the remnant today and prepare for the great outpouring of His Spirit upon the Jewish people tomorrow.

I hope you will enjoy the rest of the newsletter, especially learning more about our ministries in the Holy Land. Please pray for our staff in Israel and around the world.

Please consider a generous Thanksgiving gift today to help us continue our ministries. We cannot do all of what God has called us to do without your partnership.

Have a blessed and joy-filled Thanksgiving!

P.S.  We had a great conference in Texas last month! The messages and videos are available on our website: thegospelandthemiddleeast.com. I know you will enjoy these great Bible studies and sermons! 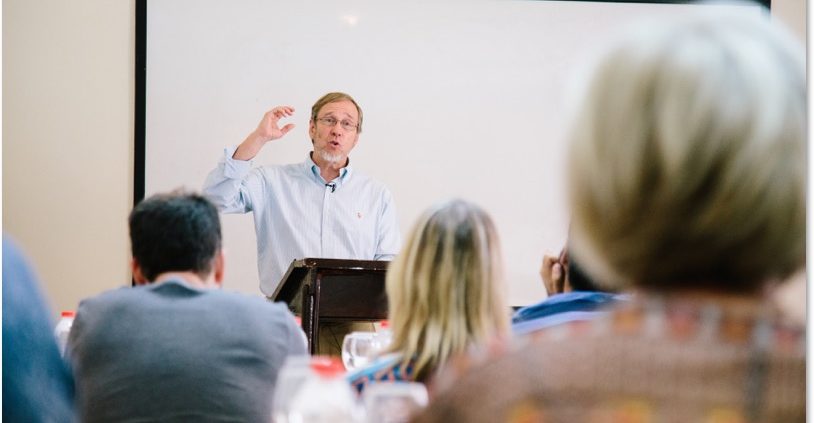 Ministries of Love and Generosity

Why is Jewish Evangelism Important?
Scroll to top