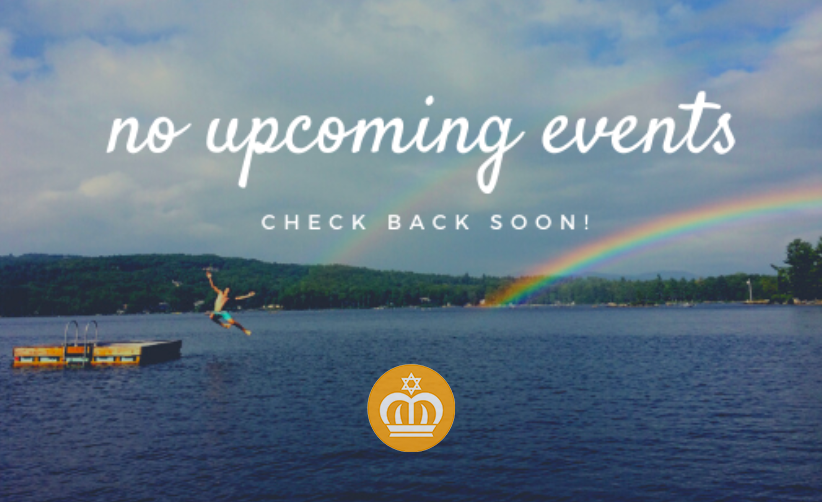 Sign up for our Newsletter to be notified of future events. 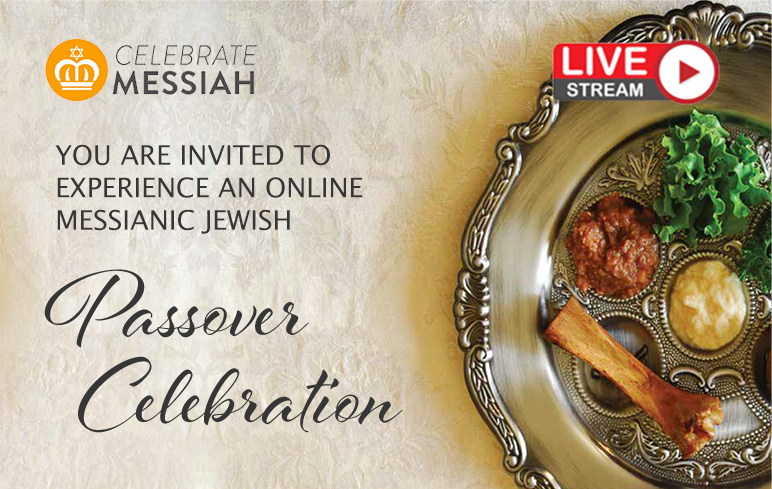 You are invited to attend Melbourne’s Community Passover Seder live-stream!You can look forward to the following:

The celebration is absolutely free, but you will need to register to receive the link to watch. But hurry, because Passover is approaching quickly!

Please also feel free to spread the word and invite your family and friends. 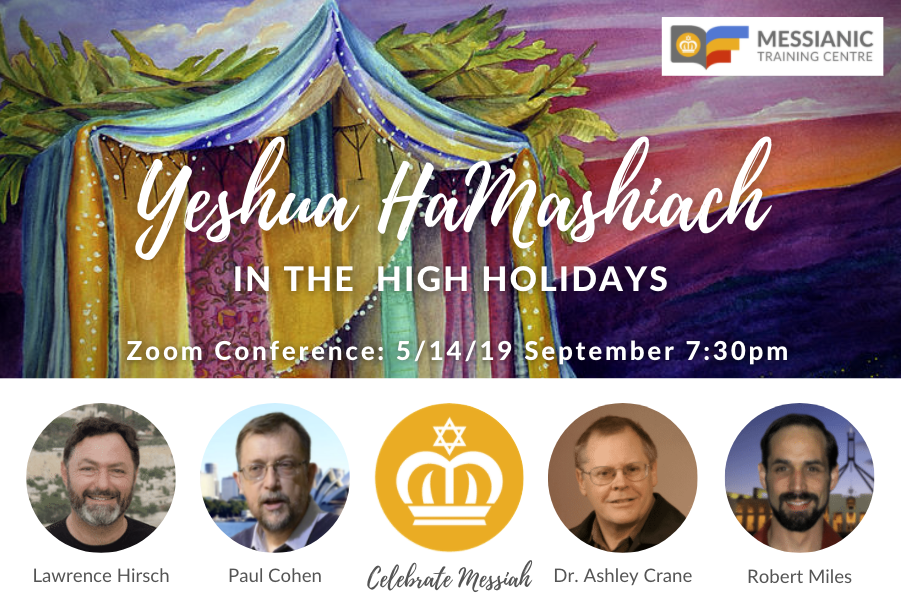 Yeshua HaMashiach in the High Holidays

Celebrate Messiah, together with the Messianic Training Centre, is delighted to invite you to attend our upcoming Zoom seminar series: “Yeshua Hamashiach in the High Holidays”.

We will be exploring the meaning and significance of the “Feasts of the Lord” for believers today as “heavenly guideposts” that point to the redemption that we experience through faith in Yeshua HaMashiach (Jesus the Messiah). We will see the Gospel in the High Holidays.

The 3-part Zoom seminar will be hosted by Lawrence Hirsch, Executive Director of Celebrate Messiah and Rabbi of Beit HaMashiach Messianic Congregation and presented by 3 members of the Celebrate Messiah National Team:

Messiah in the Feast of Tabernacles (Sukkot)
Sunday 19 September, 7:30pm

This is a FREE seminar. However, registration is required in order to receive your link to the Zoom sessions. So, please anticipate a wonderful time of learning and enrichment—and do not wait! Register TODAY! 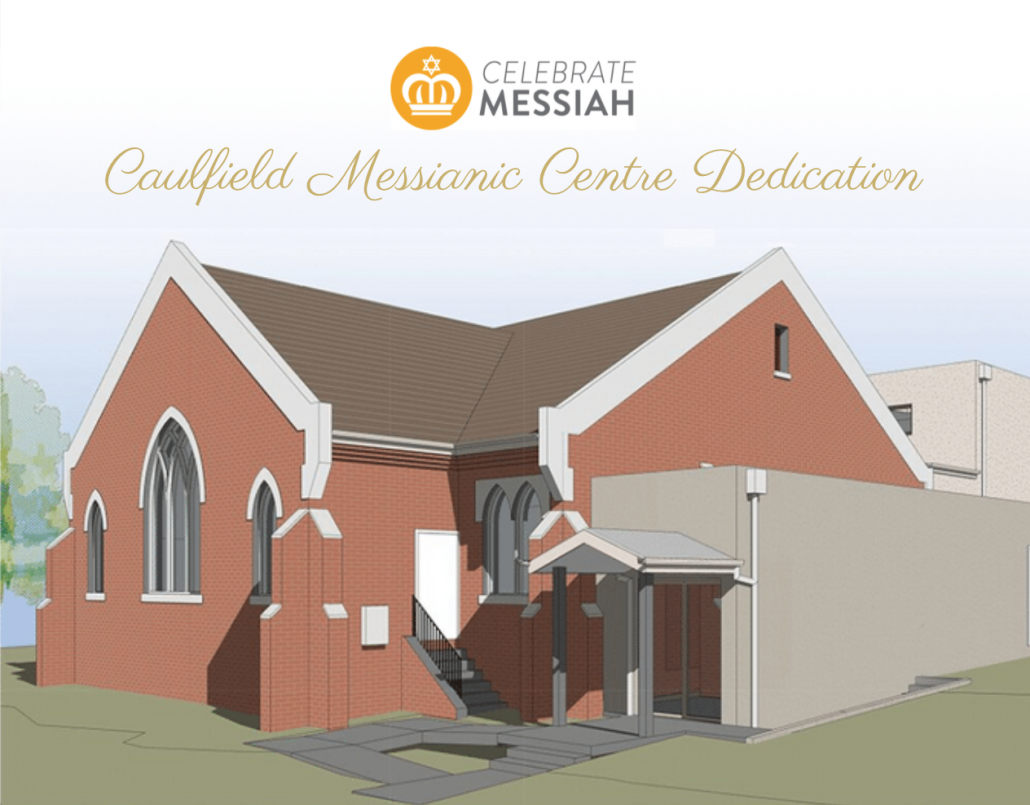 We are excited to invite you to join us for the livestream of the dedication of the newly built Caulfield Messianic Centre, the first custom-made Messianic Centre and Synagogue in the Southern Hemisphere.

We are praising God for his blessing and provision for this beautiful facility in the heart of the largest Jewish community in Australia. We are also so thankful for our many faithful supporters who have contributed greatly to make this dream a reality!

For those who have supported the Caulfield Messianic Centre Project, we have already sent an invitation to attend in person, and the demand has been so high that we reached our limit of 200 people in just 2 days!  We are hoping that hundreds more will join our livestream to share in this joyous and historic occasion.

The Caulfield Messianic Centre is home to the ministries of Celebrate Messiah and Beit HaMashiach Messianic Congregation and includes; a worship centre, dining room, art gallery, breakout rooms for children’s ministry, fully equipped kitchen, staff offices and a boardroom. We are so incredibly grateful to the Lord for his blessing of this new facility.

Please join our livestream and celebrate with us and let us give thanks to the Lord together.  There will be a message, a time of prayer and worship music. 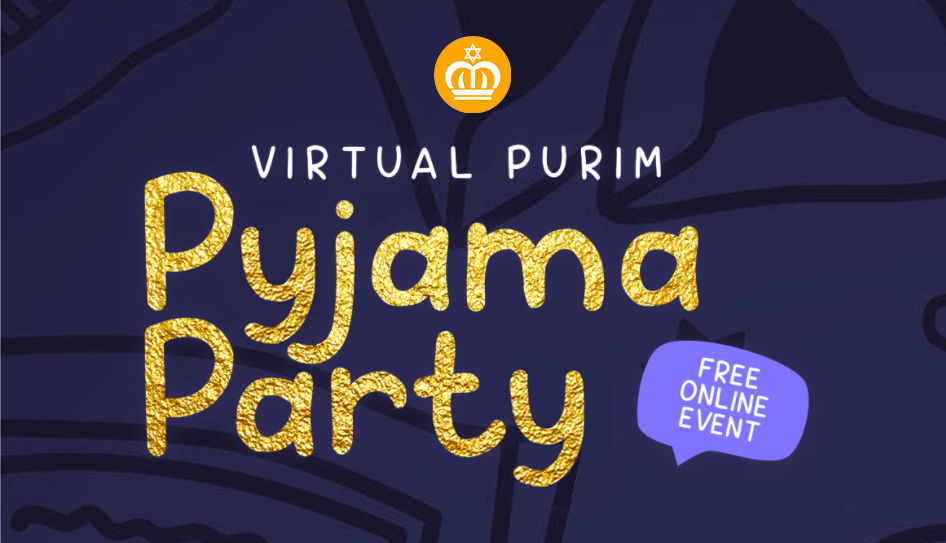 Purim is a fun Jewish holiday celebrating the time when God used an orphan named Esther and her cousin, Mordechai, to rescue the Jewish people from a wicked man named Haman. Our virtual program will highlight God’s power and desire to protect His people, and explore how Purim ultimately points to the rescue and protection we have in Yeshua the Messiah.

This will be Celebrate Messiah’s first-ever virtual Purim event for children and the whole family! You can look forward to the following:

So put on your coolest, craziest PJs and join us for our:

The celebration is absolutely free, but you will need to register to receive the link to watch. But hurry, because Purim is approaching quickly! 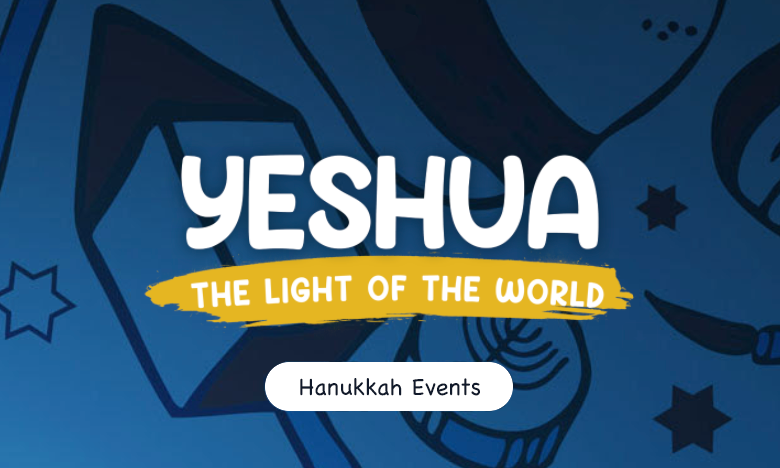 More Information: Yeshua: The Light of the World

“Yeshua: The Light of the World: A Virtual Messianic Jewish Celebration of Hanukkah

The Hanukkah celebration, also known as “The Festival of Lights” commemorates God’s miraculous provision for the Jewish people during the second century BCE. Under Greek occupation and persecution, a small band of faithful but poorly armed Jews, led by Judah the Maccabee, defeated one of the mightiest armies on earth, drove the Greeks from the land, reclaimed the Holy Temple in Jerusalem and rededicated it to the service of G‑d.

When they sought to light the Temple’s Menorah (the seven-branched candelabrum), they found only a single cruse of olive oil that had escaped contamination by the Greeks. Miraculously, they lit the menorah and the one-day supply of oil lasted for eight days until new oil could be prepared under conditions of ritual purity.

Thus the festival of Hanukkah, meaning “dedication” was born to commemorate this miracle and is observed by Jewish people to this day. On each of the eight nights of the festival another candle of the nine-branched Menorah (known in Hebrew as the “Hanukiah”) is kindled. For Messianic Jews and Christians, Hanukkah takes on a greater significance. Yeshua not only observed Hanukkah (John 10), he is called “The Light of the World”, and we as his followers are called to “Let our light shine before others”. (Mathew 5)

Therefore, we are excited to invite you to join us for “Yeshua: The Light of the World” two special Hanukkah celebrations.

We hope to see you there to celebrate Yeshua, the Light of the World!

Session 1 – For Kids and Young Families

Join us for our first-ever virtual Hanukkah service designed for children, featuring fun Hanukkah songs, stories, activities, and the telling of the Hanukkah story. At the end of the service, we will light the Hanukkah candles together.

We hope you can join us! Your children will have a wonderful time, and we believe you will too!

Please note: This program was originally produced by our global partner Chosen People Ministries and re-aired with permission.

Join the Hirsch Family for the 8th and final night of Hanukkah!

Lawrence will be delivering a special Hanukkah message and we will be kindling the last Hanukkah candle. We will also have a time of worship with Lizzy and Simon who will be bringing the celebration of Hanukkah to life with traditional and modern Hanukkah songs. 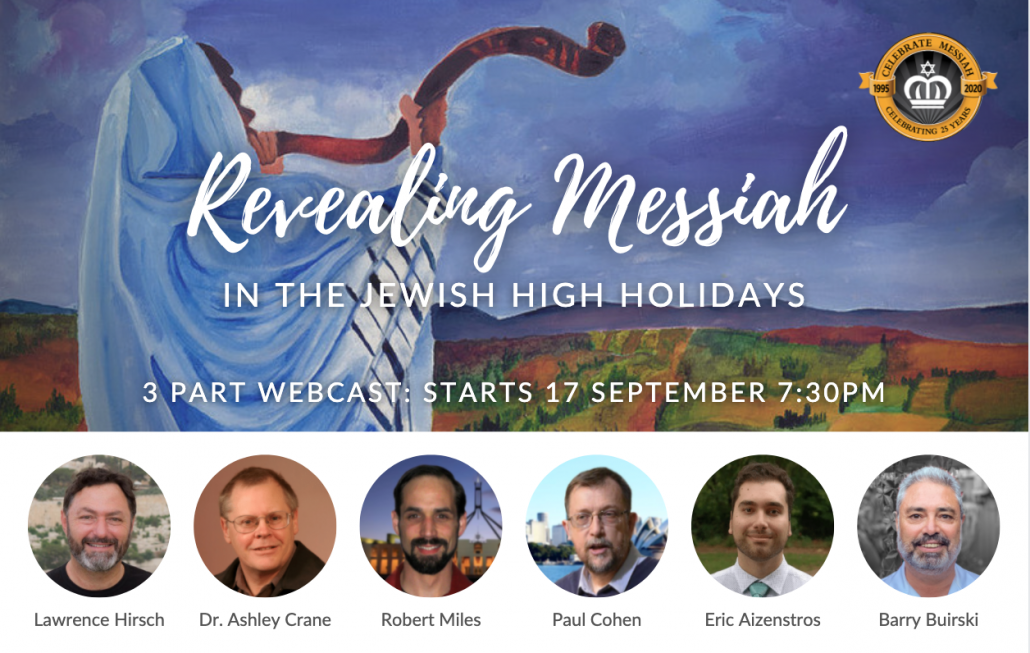 “Revealing Messiah in the Jewish High Holidays” webinar presented by 6 members of the Celebrate Messiah National Team will give an overview of the meaning and significance of the “Feasts of the Lord” for believers in Messiah today. We will explore the Biblical institution of these feasts as “heavenly guideposts” and how they point to the redemption that we experience through faith in Yeshua HaMashiach (Jesus the Messiah).

Israel: Whose Land is it Anyway? - More Information

The recent delay of Israel’s annexation of parts of the West Bank has brought some vital questions back to the forefront of the news. Issues such as the boundaries of the Promised Land and Israel’s biblical right to the territory are discussed as hot topics these days. There are certainly a lot of voices on the subject, and sometimes one may not know where to start digging for the truth. For that reason, we have put together an informative conference for you with a great line up of Bible scholars and evangelists, including Dr. Mitch Glaser, Dr. Michael Rydelnik & Joel C. Rosenberg. 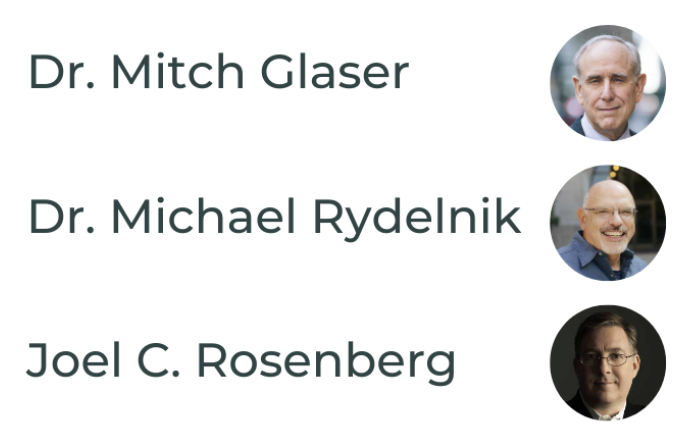 You will get answers to some pressing questions when you join the Israel: Whose Land is it Anyway? Conference.

You will not want to miss this!

This is a FREE event but you must RSVP to receive your link to the event.

Please note: This event has been pre-recorded and reproduced with permission from our Global Partner Chosen People Ministries. We will also make the event available for you to watch after the publication date if you cannot attend at the time. 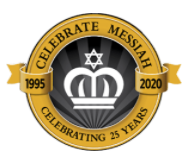 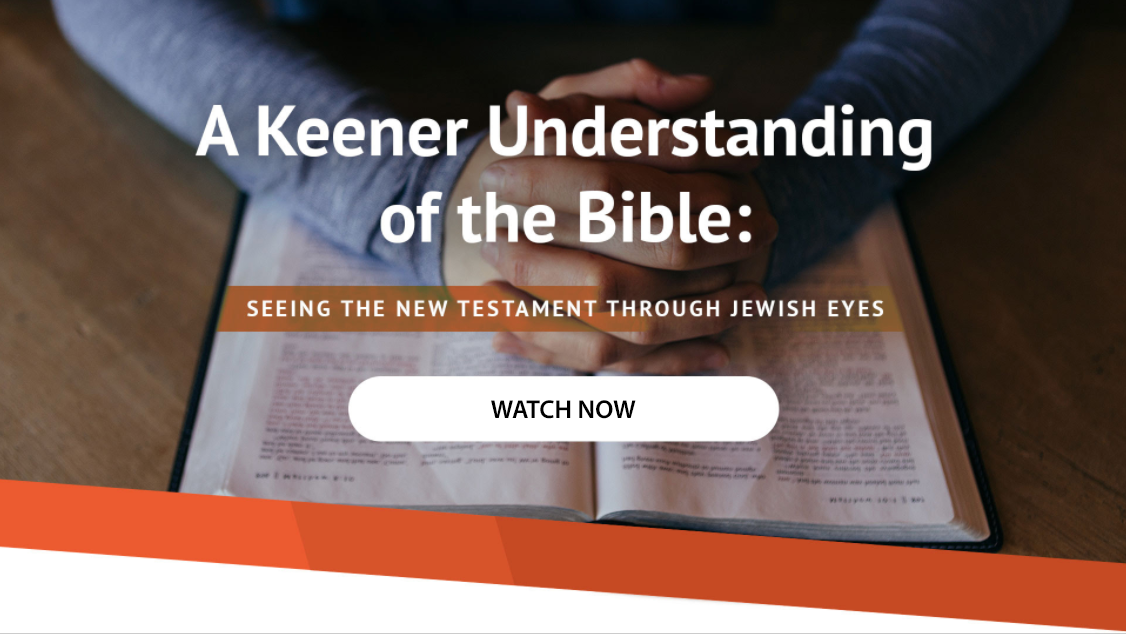 Well-known for his research on the Jewish and Greco-Roman context of the New Testament, Dr. Keener will teach us more about the Jewish context of key books and passages of the Bible. It will be a wonderful teaching series that you will not want to miss! Take note of the days below, and we hope you can join us!

Session #1: The Jewish Context for the Sermon on the Mount

Session #2: The Jewish Context of the Gospel of Matthew

Session #3: The Jewish Context of the Gospel of John

Session #4: The Jewish Context for the Book of Revelation

Dr. Keener is the author of twenty-eight books—six of which have won book awards in Christianity Today. His IVP Bible Background Commentary: New Testament (1993), now in its second revised edition (2014), has sold more than a half-million copies, including editions in several languages.

This is a FREE seminar. Please note that the sessions have been pre-recorded and reproduced with permission from our Global Partner Chosen People Ministries. We will also make them available for you after the publication dates so you can watch at your convenience.

Music for the Mishpochah - More Information

Join us this Saturday, 6 June 2020 at 7:30PM (AEST) for ninety minutes of worship with some of our favourite artists including Marty Goetz, Paul Wilbur, MIQEDEM, and Joshua Aaron!

The concert has been organized by our international partners Chosen People Ministries along with *FIRM. 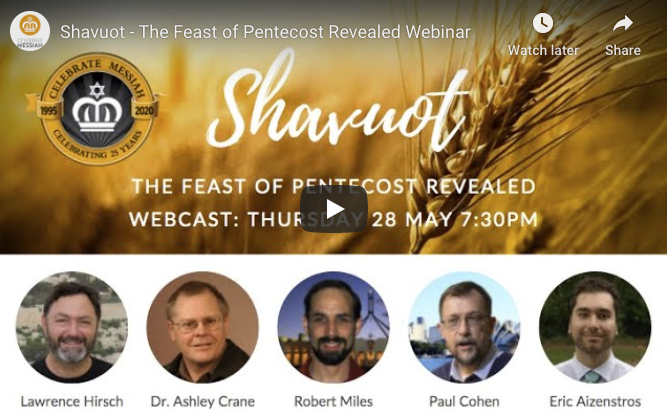 The webcast will feature five presenters from our National Celebrate Messiah Team, each presenting on a topic which they have researched, with worship by Simon and Lizzie Nygaard.

4. Shavuot and the Outpouring of the Holy Spirit
Ashley Crane (Minister at Large – Celebrate Messiah) 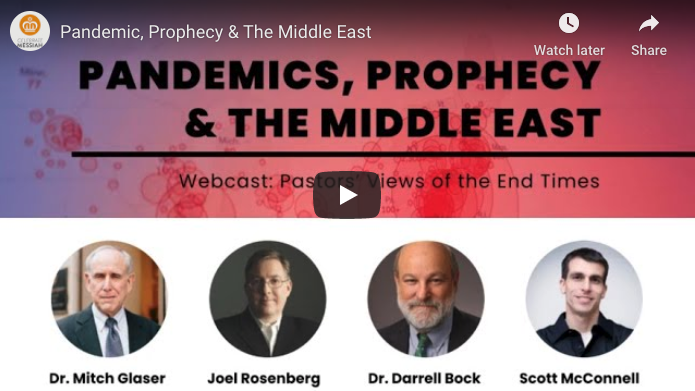 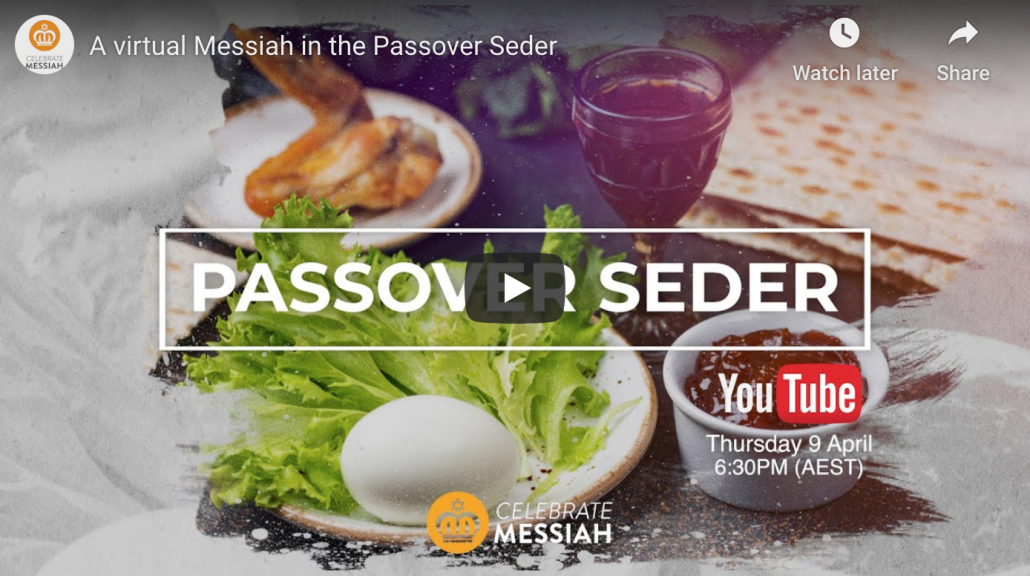